One of Queanbeyan-Palerang region’s true hidden gems is the historic town of Braidwood. The town was the first to be listed in the NSW State Heritage Register and it doesn’t take you long to figure out why. As soon as you step on to the town’s main street, you’ll be surrounded by beautiful colonial buildings dating back to the 1800s. The best way to immerse yourself in the town’s rich history of pioneers and bushrangers, colonialism and gold rushes, is by foot. This fascinating walking tour will take you through 49 historic landmarks of Braidwood in no time at all.

Originally, the Braidwood area was occupied by people from the Yuin Nation for tens of thousands of years. European explorers first arrived in 1822, settling in throughout the 1820s. The settlement was located near the headwaters of the Shoalhaven River.

Between the 1820s and 1840s, the town grew little by little until the gold rushes of the 1850. During this era, Braidwood was booming as the primary town in the district. However, the growth didn’t last for long, as once the gold ran out, so did migration to the area.

The main street through town, Wallace Street, is filled with colonial buildings from the 19th century. This walking tour will take you through the entire length of the street, showcasing 18 outstanding locations from the early days of the town’s development in the mid-1800s.

Some of the oldest remaining buildings in Braidwood are situated in the northern end of Wallace Street. The street’s close proximity to Monkittee Creek made it the perfect spot for a business centre in the 1940s. To this day, it houses the Old Post Office, Braidwood Museum, Braidwood Hotel, the Albert Buildings and the Court House.

Over time, Braidwood’s business centre started moving south from the northern slope of the street. Hotels, such as the Albion, the Criterion and the Corner Hotels, were erected in the latter half of the 19th century as a response to the growing needs of the town during the gold rush era. 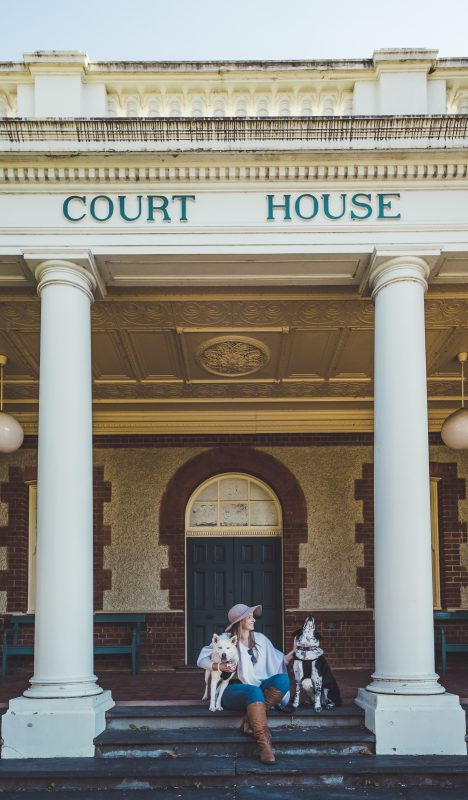 The Eastern Side of Town

After the gold rush, the town witnessed expansion to the east in the 1950s and 1960s. Several new dwellings, hotels and churches were introduced along Elrington, Duncan, Wilson and Lascelles Streets. To this day, many of these buildings remain in near original condition.

Additionally, the eastern side of town boasts the first grand hotel ever built in Braidwood – the Doncaster Inn. Built in about 1840, it was the centre of the town’s social life for many decades. For about a hundred years, it was re-purposed as a convent school, until it was re-established as a hotel in 1980. The closely connected Maria Badgery’s House served as the owner’s quarters for most of the mid-19th century.

Other major sights on the eastern side of Braidwood include the spectacular St Andrew’s Anglican Church. One of Braidwood’s finest buildings, it is built of local granite and features some of the first gargoyles used in ecclesiastical buildings in New South Wales. Inside, you can see magnificent stained glass windows and plaques commemorating pioneer families. You can also climb to the top of the tower for picturesque views over the town.

The Western Side of Town

Heading west from Wallace Street, you’ll come across ‘The Nest’. This wooden cottage of the 1870s is typical of many built following the gold rush. It features an adjoining paddock or market garden in which the resident would produce much of their own food. The Nest has been carefully restored by descendants of the original owner.

Perhaps the most notable of the historic sites in the western side of town is Tidmarsh. It was completed as an inn after 1856 by Braidwood’s first Clerk of Court and licensee of the Doncaster Inn, Patrick Goulding. Tidmarsh had many inhabitants from Police Superintendent John Orridge to Rowland Hassall, James Malone and a series of doctors and dentists. It has since been restored to look exactly as it did in 1862.

Worth a visit are also the Poundkeeper’s Cottage from the 1850s, one of few surviving brick cottages on Ryrie St, and the Worker’s Cottages on Lascelles St. These cottages, moved from their original sites in the early 20th century, date back to the 1860s.

Off the beaten track

If you’re up for a bit of a longer stroll, we recommend heading towards Garvey Street along Coronation Avenue to visit a brick home dating back to 1880 at 1 Coronation Street. From there, you can opt for a relaxing walk alongside Flood Creek. After crossing the creek over Archer Bridge, head south towards Cowper St and you’ll find the Braidwood Cemetery.

The Braidwood Historic Cemetery dates from the earliest days of the settlement. Many important residents and pioneers were buried there and their gravestones provide great detail about the period. You can also find the memorial for the Special Constables murdered by the infamous bushrangers, the Clarke Brothers, in the former Catholic section above the creek.

Continuing over to 59 Cowper St, you will come across a freestone building from 1850s, with late 19th century additions and fine Edwardian interiors. As the final stop on your tour, you should pay a visit to the Britannia Brewery Site. Once a striking two storied stone brewery and stone residence, it was damaged by the 19th century floods. The story goes, the floods left the brewer stranded on his roof. There’s an abundance of other great stories and sites hidden around Braidwood. If you’re keen to discover even more about the region, visit the Information Centre on Wallace Street and have a chat to our lovely team members, or explore our other tracks and trails.